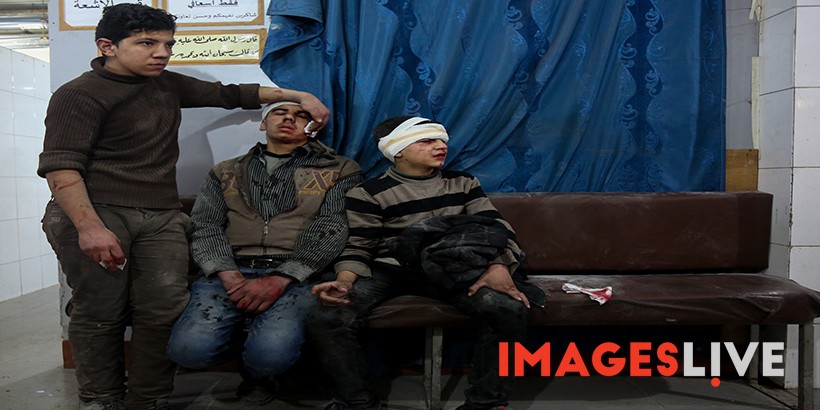 Kafr Batna, Eastern Ghouta, Syria. 6th July 2018. Warplanes attack the city of Kafr Batna in Eastern Ghouta with two air raids, each carrying more than 6 rockets, hitting residential areas and causing the death of seven civilians and the injury of ninety. Among the sites which were destroyed there was a kindergarten. Kafr Batna is one of a number of towns hit by heavy airstrikes by Syrian and Russian forces on Tuesday. The other towns included Saqba, Hamouriya, Douma, Medyara, and Ein Tarma.

Eastern Ghouta is a rebel-held area near Damascus which has been besieged by the Syrian government since 2013, as the enclave fell under opposition control. The Syrian and Russian forces have intensified their air attacks on the Damascus suburb since last mid-November in a push by the Syrian government to recapture one of the latest opposition strongholds in Syria.  Over the last few days the airstrikes have intensified, with Tuesday’s attacks resulting in a particularly high number of casualties.  Eastern Ghouta, which has been suffering from food, medicines, and medical supplies shortages since it was besieged, has recently seen its insecurity worsening as a result of the latest intense period of bombing.

Syrian state media has also been reporting that shells fired by rebels in Eastern Ghouta to the Syrian capital had fallen on government-held parts of Damascus regularly over the last few weeks, resulting in a number of civilian deaths. Moreover, according to the Syrian foreign ministry, the office of Russia’s trade mission in Damascus was bombed on Tuesday.