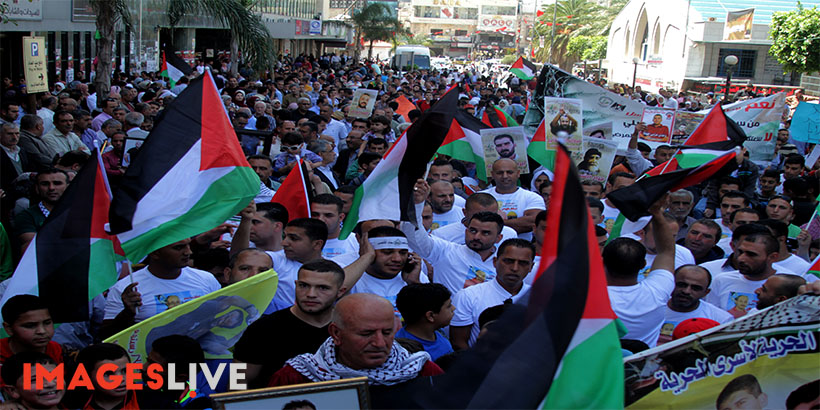 Nablus, West Bank, Palestine. 17 April, 2016. Thousands of Palestinians march in a demonstration in Nablus in commemoration of Prisoner’s Day.

According to Amnesty International’s latest report on “Israel and Occupied Palestinian Territories”, ‘in the West Bank, including East Jerusalem, Israeli forces committed unlawful killings of Palestinian civilians, including children, and detained thousands of Palestinians who protested against, or otherwise opposed Israel’s continuing military occupation, holding hundreds in administrative detention. Torture and other ill-treatment remained rife and were committed with impunity’.

On this year’s Prisoner’s Day, Israel holds over 7,000 Palestinian political prisoners, over 400 children and approximately 60 women, as well as 700 Palestinians in administrative detention (including six children), held for indefinite periods without charge or trial.

Palestinian prisoners in Israeli jails continue to be subject to wide-ranging violations of their rights and dignity. Palestinian prisoners have been systematically detained in poor prison conditions, including overcrowding, unsanitary conditions, extreme temperature, while being denied the right to a fair trial, access to health care, education, as well to the right of having visitors.

The Palestinian Human Rights Organizations Council (PHROC) has denounced and called for an end to the Israeli occupation forces (IOF) collective punishment in the form of mass arrest campaigns, the use of administrative detention, the denial of fair trial, and the illegal transfer and deportation of detainees. Palestinian women and children have also been subjected to continuous arrest and detention.

According to Human Rights Watch ‘Israeli security forces have used unnecessary force to arrest, or detain Palestinian children as young as 11. Security forces have choked children, thrown stun grenades at them, beaten them in custody, threatened and interrogated them without the presence of parents, or lawyers and failed to let their parents know their whereabouts’.

According to Defence for Children International (DCI) ‘children should only be detained as a last resort, for the shortest appropriate period of time and under absolutely no circumstances should they be subjected to torture or ill-treatment’. Nevertheless, according to the UN Children’s Fund (UNICEF) report “Children in Israeli Military Detention Observations and Recommendations”, ill treatment in the Israeli military detention system remains ‘widespread, systematic, and institutionalised throughout the process”.

Since October 2015, following the renewal of large-scale demonstrations across the Occupied Territories there has also been mass scale arrest and extra-judicial executions of Palestinians by the Israeli authority. The DCI has also reported that in autumn 2015, ‘the number of Palestinian children in Israeli prisons skyrocketed to the highest it has been since February 2009. By the end of December 2015, 422 Palestinian children were in the Israeli prison system. Among them were 116 between the ages of 12 and 15, the highest known total since January 2008 when the Israel Prison Service (IPS) began sharing data’.

As highlighted by DCI, ‘Israel has the dubious distinction of being the only country in the world that systematically prosecutes between 500 and 700 children in military courts each year. Since 2012, Israel has held an average of 204 Palestinian children in custody each month, according to data provided by the Israeli Prison service (IPS)’.

Images Live has filmed Khaled Shtaiwi, a twelve-year-old Palestinian child, being shot and seriously injured in his thigh by an Israeli soldier while joining a demonstration in the town of Kafr Qaddum