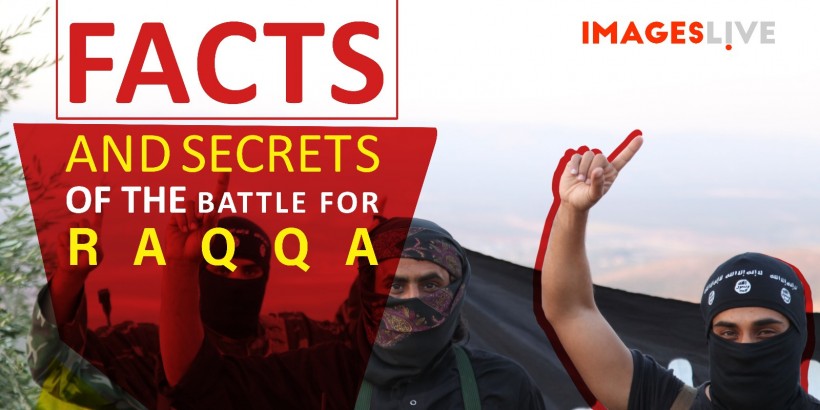 All the information in this report was provided by one of the Islamic State leaders, Abu Musab Al-Ansari, in an interview with journalist and film-maker Medyan Dairieh. The interview was carried out through voice and text messages in very difficult and complex circumstances.

As Abu Musab Al-Ansari explains to Medyan Dairieh, the battle for Al-Raqqa began on June 6, 2017, as expected by the Islamic State after the fall of Mosul and after the attack on the villages in the Raqqa countryside and the approaching of the Kurdish forces to the city following their capture of most of the villages around Raqqa. 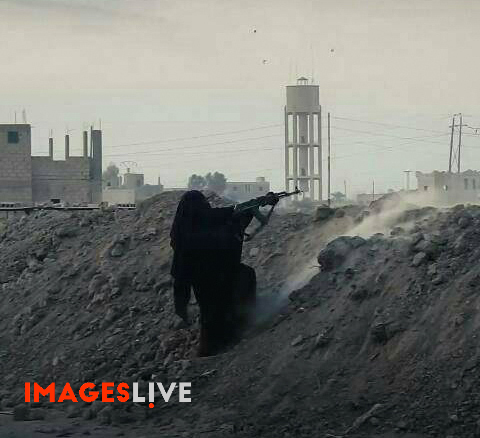 An Islamic State female fighter on the frontline in the Syrian city of Al-Hajar al-Aswad,south of Damascus

According to Abu Musab Al-Ansari, by the time of the Raqqa offensive, most of the civilians living in city had left it on their own will. The members of the Islamic state ensured their safe departure according to the civilians’ wishes. By the time the offensive on Raqqa began, only some members of the Islamic State with their families as well as some civilians had remained in the city. Those who decided to stay were those who maintained their loyalty towards the Islamic State up to the end.

The Kurdish forces began launching a violent military offensive on the city, with the support of the anti-IS US-led coalition and the Russian forces providing vast air cover. According to Abu Musab Al-Ansari, different types of weapons were employed in the bombardment of the city, including ballistic missiles falling on the entire city as double-tap airstrikes with great intensity: any strike from two missiles was powerful enough to destroy five very large buildings. The aircrafts targeted the city with all kind of bombs, including vacuum bombs as well as phosphorous bombs, which were used in many strikes. Bombs would weight more than a tonne and would cause fire following the blast. The air raids were incessant both day and night, to the extent that there was no longer a place where families could find shelter and hide from the airstrikes. When bombs dropped on Raqqa they would not just destroy buildings, but also create craters of between 10 to 15 metres in diameter, and between 7 and 9 metres in depth and set it on fire. 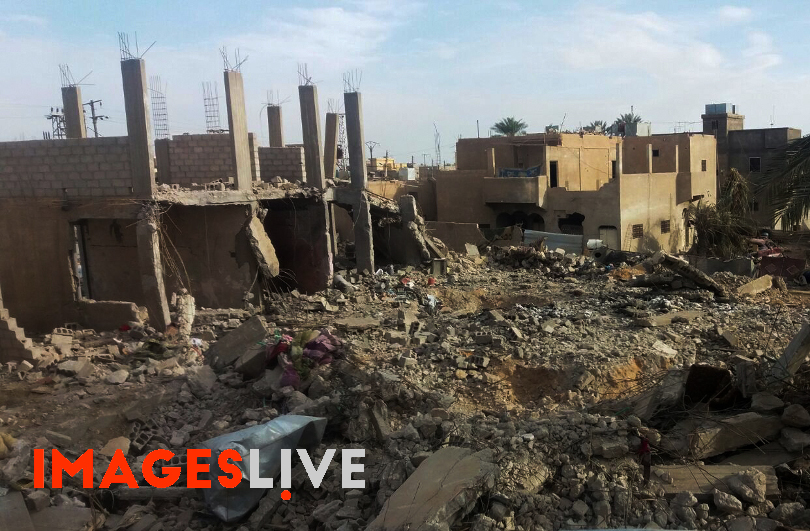 The men of the Islamic State failed to keep sight of their families as a result of the intensity of the bombing and lost track of their family members for several days. Moreover, some children lost their mothers as they were attempting to escape the bombardment and search for shelters to keep safe. Some families were able to reunite with their members after several days and sometimes they would find the remaining family members among the dead or the injured in what remained of the field hospitals, which were affected by a severe shortage of medicines and medical supplies.

Then, food supplies began to run out at the same time electricity, water and communications were completely cut off and the Islamic State fighters completely ran out of weapons. In such circumstances the members of the Islamic State were forced to agree to a truce with the Syrian Democratic Forces since, as Abu Musab Al-Ansari explains, they had no other alternative. The truce meant that the bombing would stop and that the Islamic State fighters would be allowed to withdraw with their families during the ceasefire in the direction of the city of Mayadin and the villages of the Al-Jazira district. A rift appeared at this point among the Islamic State fighters in Raqqa as a section of them refused to observe the truce agreed with the Kurdish forces and fought to the death. Some of them blew themselves up as they ran out of weapons.
The battle in Raqqa ended approximately in mid-October with the withdrawal of most of the Islamic State members from Raqqa and the taking control of the city by the Kurdish Forces. It happened after the killing of a large number of Islamic State’s members and some of their families as well as of many civilians originally from Raqqa, as a result of the indiscriminate and heavy airstrikes of the city.

Play video for information on The evolution of the Islamic State – Video: IMAGESLIVE

The majority of the Islamic State members withdrew from Raqqa and went to the city of Al-Mayadin, which was soon surrounded. The city of Al-Mayadin became encircled by the Syrian regime forces from one side and from the Kurdish forces on the other site as well as being hit by aerial bombardment by the anti-IS coalition and the Russian forces. The Islamic State forces fought for fifteen days but they could not sustain their resistance any longer as the Islamic State fighters had not regrouped their forces in Al-Mayadin since their withdrawal from Raqqa. They then decided to withdraw in the direction of some villages in Deir al Zour. The Islamic State members maintain that the reason of each of their withdrawals was the violent air bombardment, and they argue that had it not been for the intensity of the air attacks on them the battles would have terminated in their favour without any doubt, as they had been de facto in control on the ground. After that Islamic State fighters withdrew completely from Al-Mayadin heading to the most important villages in Deir al-Zour (Granjie, Hajin, Sousa, Baqaan, Al-Shaafah, Lakshamah, Bu Badran, Al-Bahra).

Nevertheless, it has been mentioned that this truce has been violated and the bombing has started again in the villages of Hajin, Graneej, and Al-Shaafa. The Islamic State members have resisted the attacks and heavy battles have taken place in Graneej, which is currently besieged. In Hajin, guerrilla style warfare is taking place. Al-Shaafa is resisting the intermittent bombardment. At the same time violent battles are happening in the Hama and Idlib countryside against the Syrian regime forces. This vast operation against the Islamic State over several months has resulted in IS remaining in control of 5% of the land they used to rule over.

According to Abu Musab, in spite of their losses the Islamic State is not over and foreign fighters are still on the ground fighting. Some of the IS fighters’ wives have refused to leave and are currently with the fighters. However, more than two thousand wives of IS foreign fighters are currently detained in a camp by the Kurdish forces.
Moreover, Abu Musab confirmed that in addition to the Caliphate still existing, its forces are organizing and redeploying themselves, and he added that the Islamic State’s forces are actually regaining areas they had lost. Abu Musab also pointed out that before the fall of Raqqa, work in different areas of Iraq had been undertaken by Islamic State members acting covertly; weapons were distributed in a large number of areas in secret storage places, while a number of Islamic State members were deployed in so-called security area acting underground just like in the past. Abu Musab added that the Islamic State’s current members are currently working at laying new foundations to the organisation.