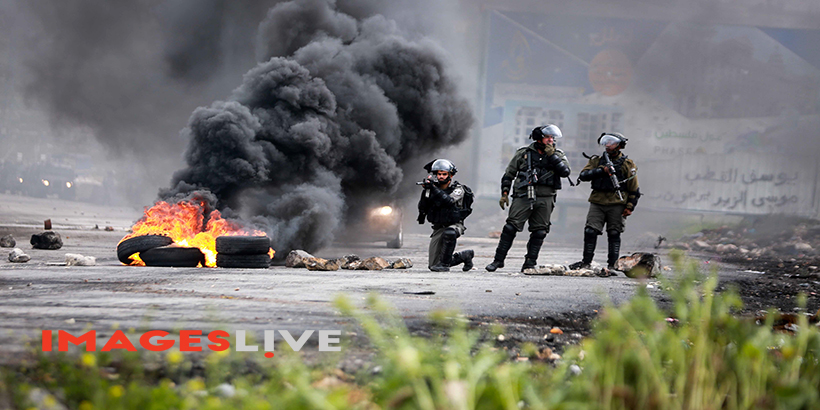 Gaza and West Bank, Palestine. 31 March 2018. 17 Palestinian demonstrators were killed, while more than 1,400 were injured, in the Gaza Strip on the Gaza-Israel border  during the “Great March of Return”, on the last Friday in March. Around thirty thousand Palestinians were attending the Great March of Return, calling for the right of return for Palestinian refugees to towns and villages their families had fled or were expelled from during the war following the 1948 establishment of the state of Israel. Friday’s demonstration also marked the 42th anniversary of “Land Day”, which commemorates the death of six Palestinians killed by the Israeli forces in 1976, during general strikes and marches against the Israeli government’s expropriation of Palestinian-owned land in the Galilee.

The violence on Friday broke out after around thirty thousand Palestinians, including women and children, gathered in five different points along the fenced border of the Gaza Strip, about 700 metres away from the fence. Although the March and protest organizers had allegedly urged demonstrators to stay away from the border area, gradually hundreds of young people moved closer to the border. According to the Palestinian Ministry of Health Palestinian casualties were caused by the Israeli forces firing live and rubber-coated bullets and tear gas canisters at protesters. As stated by the Israeli military, Palestinians rolled burning tires and threw stones at the Israeli forces, who responded with live bullets and tear gas.

Demonstrations commemorating Land Day and in solidarity with the “March of Return” also took place in several places in the West Bank on Friday, with more than 60 Palestinians being injured in clashes with Israeli Security Forces. Palestinian president Mahmoud Abbas declared Saturday a day of national mourning for the souls of those Palestinians killed and injured in Friday ‘s March and protests, for which he deems Israel fully responsible. The Israeli Army has blamed some Palestinians protesters trying to damage and break through the security fence for the incidents on Friday and claims that Hamas intended to use Friday’s protests as a ploy to attack Israel. The events have resulted in heightened tension along the Gaza-Israeli border, with the UN Security Council calling for an emergency meeting to discuss the deadly clashes in Gaza.

The “March of Return” on Friday is the beginning of a six-week long protest due to culminate on 15th May, the day after the establishment of Israel and which is referred among Palestinians as the Nakba or catastrophe as it had many consequences for the Palestinians, particularly their loss of land and the exodus of great part of the Palestinians from the territories which became part of the Israeli State. Indeed, more than 70 percent of Gazans descend from Palestinians who fled or were driven from their homes in the lands taken over by Israel during the 1948 war. If in 1949 there were 726 Palestinian refugees, now they are 5 million. Many of them still live in camps scattered in the West Bank, the Gaza Strip, Jordan, Lebanon, and Syria. Israel is opposed to any possible return of refugees as it argues that they would destroy the Jewish character of the Israeli State. However, the Palestinian refugees’ right of return to their homes is contemplated in UN Resolution 194, which calls for their return as soon as possible, as well as for the compensation for those who decide not to return. Palestinian “Land Day” has become a recurrent date of protest since 1977, against the constant seizure of Palestinian land, the continuous construction of Israeli settlements, of roads for settlers, and of military zones in Palestinian territories.