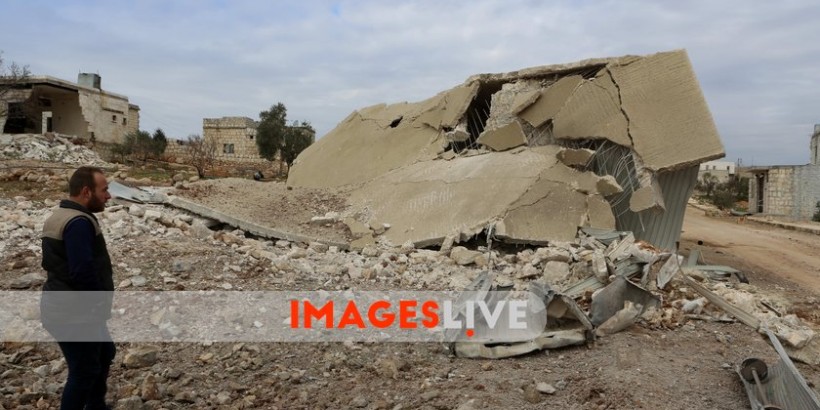 Aleppo, Syria. 01 March 2020. Syrian government forces have advanced in many towns and villages in north-western Syria during their campaign to seize the last major opposition stronghold in the country. Since April 2019, Syrian troops backed by their Russian ally have been waging a military offensive to capture the last rebel-held enclaves in the country’s northwest. A number of ceasefires failed to hold in the summer, and Syrian forces have intensified their campaign since last November and particularly since the start of the year to recapture the Idlib province, making significant advances.

Since early February, the epicenter of the offensive in northwest Syria shifted away from Idlib to the western Aleppo province, with Russian-backed Syrian government forces launching raids on several villages and towns in the western Aleppo countryside, including Takad. The shift toward western Aleppo, which has been under rebel-control since 2012, has led to the Syrian government consolidating its presence in the area and regaining full control of the M5 highway, connecting Damascus to Homs, Hama, and Aleppo.

September 2018 agreement between Turkey and Russia to establish a demilitarized zone in Idlib. Turkey, which is home to 3.6 million Syrian refugees, fears that the displaced may overwhelm its borders.

Since the campaign resumed with full strength late last year, hundreds of thousand of Syrians from the Idlib province have been displaced to areas, such as Atme, close to the Turkish border, and to the Turkish controlled town of Afrin, in order to escape the fighting and the intense attacks in what the UN has defined as the major humanitarian crisis of the 9-years-long Syrian conflict.

As the Syrian government has been advancing in the last few weeks in the west of the Aleppo province retaking control for the first time of towns and villages which have been under the control of opposition groups for years, thousands of civilians in the hit areas have also fled the fighting and the intense raids and artillery shelling.

One of the villages targeted in the last few weeks by the Syrian and Russian aviation is Takad, located in rural Aleppo. The inception of the Syrian conflict had brought back to the village its 5 thousand emigrants from other Syrian towns, especially from Aleppo, taking the population to 11 thousand. Takad also sheltered 6 thousand internally displaced Syrians from other areas and towns, such as Homs.

During the recent government offensive on Takad, all the families in the village fled heading to  Termanin, Afrin, and towards the Turkish border. Civilians moved with what they could carry while the bombardment was taking place. The bombardment did not spare many buildings, with the Lindau Medical Center, a clinic and dispensary which had been opened for the last 6 years thanks to German donors from the German town of Lindau, being also severely damaged. The clinic used to treat patients and dispense medicine free of charge.

Government troops are still on the offensive against remnants of opposition fighters now squeezed in a small part of rural Aleppo and in a shrinking area of the nearby Idlib province. Much fighting has recently focused on the key city of Saraqib in the eastern countryside of the Idlib governorate, with frontlines in Idlib shifting quickly in favor of either the Syrian army troops or of the rebel forces.

Tension has further mounted in northwest Syria as 33 Turkish soldiers were recently killed in Idlib, with the Turkish president blaming the fatalities on an air campaign carried out by Russian-backed Syrian government forces. Despite Russian foreign minister Lavrov accusing Ankara of deploying its troops among “terrorists” and of not properly informing Moscow of their location, Erdogan decided to retaliate ordering massive strikes targeting Syrian government soldiers and destroying dozens of military vehicles and defence systems belonging to the Syrian army. According to Turkey’s Defence Minister Hulusi Akar, Turkish forces have destroyed Syrian army helicopters, air defence systems, several tanks, artillery and rocket launchers, and “neutralised”hundreds of Syria government soldiers.

Ankara seems determined to reverse the gains recently achieved by the Syrian Army, demanding the withdrawal of the government forces from Idlib according to the 2018 Sochi agreement. Erdogan has also opened his western border on Friday, allowing thousands of Syrians refugees to gather at the Turkish border waiting to cross into Greece.