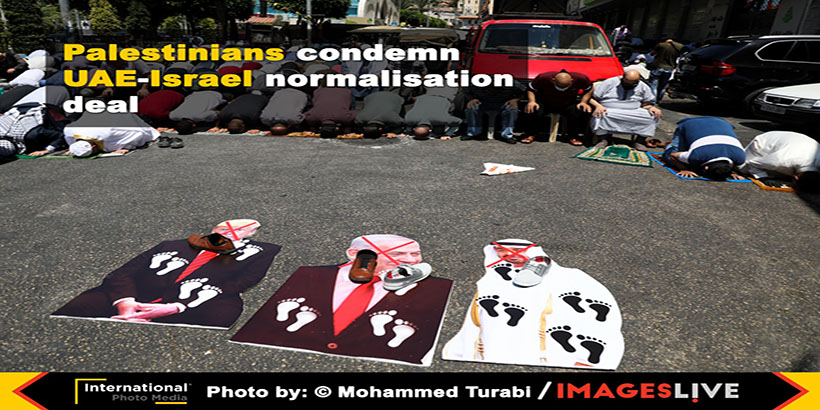 Palestine. 14 August 2020. Palestinians have been protesting in eastern Jerusalem, the West Bank, and in the Gaza Strip since the announcement by US President Trump on Thursday of the normalisation of relations between the United Arab Emirates and Israel. The agreement marks the normalisation of diplomatic ties between the UAE and Israel and is viewed as the third Israel-Arab peace deal since Israel’s 1948 declaration of independence. This means that the UAE is going to be the third Arab state to have full diplomatic ties with Israel, after the 1979 peace treaty between Egypt and Israel and the Jordan-Israel peace treaty in 1994.

President Donald, who has brokered the deal, has hailed it as “a truly historic moment” and argued that it will advance peace in the Middle East, while Israel has agreed to suspend the annexation of parts of the West Bank.

Yet, Palestinians have totally rejected the plan, which they perceive as an act of treason by the United Arab Emirates, an attempt to enforce the ‘deal of the century’, and a betrayal of their cause for their national rights and for the end of the Israeli occupation. Palestinian president Mahmoud Abbas has defined it as “an assault on the Palestinian people and an abandonment of the rights of the Palestinians and the holy sites”. The leaders of the Palestinian Authority and of all Palestinian factions, including Hamas and the Islamic Jihad, have condemned the deal between the Jewish state and the Gulf nation and issued an official statements denouncing it as a “stab in the back” by the Emirates, and called for its withdrawal.

After Friday noon prayers Palestinian protesters rallied in eastern Jerusalem, the West Bank, and Gaza, holding banners declaring the deal an act of treason and bearing the image of UAE leader Mohammed bin Zayed al-Nahyan with the label “traitor”. Muslim and Christian leaders have also expressed their condemnation of the agreement.